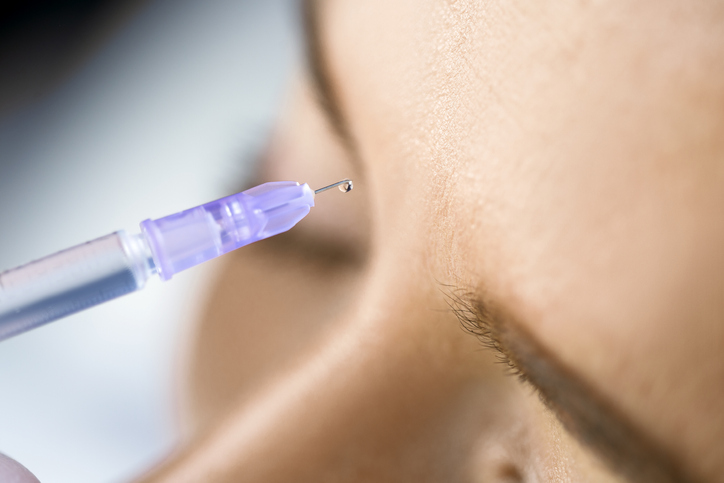 Survey: How Attitudes to Anti-Wrinkle Injectables and Fillers are Changing Across the World

Have you ever tried, or considered, anti-wrinkle injections? Most commonly known by the brand name Botox®, anti-wrinkle injectable treatments are an increasingly popular treatment across the world. In research conducted by Phorest, a global participation group gave us their thoughts on the treatment. With the majority of participants leaning on the side of interest and curiosity about the treatment, it’s clear that Botox® and other injectable treatments are not just a fad, and are here to stay.

Below are our findings. 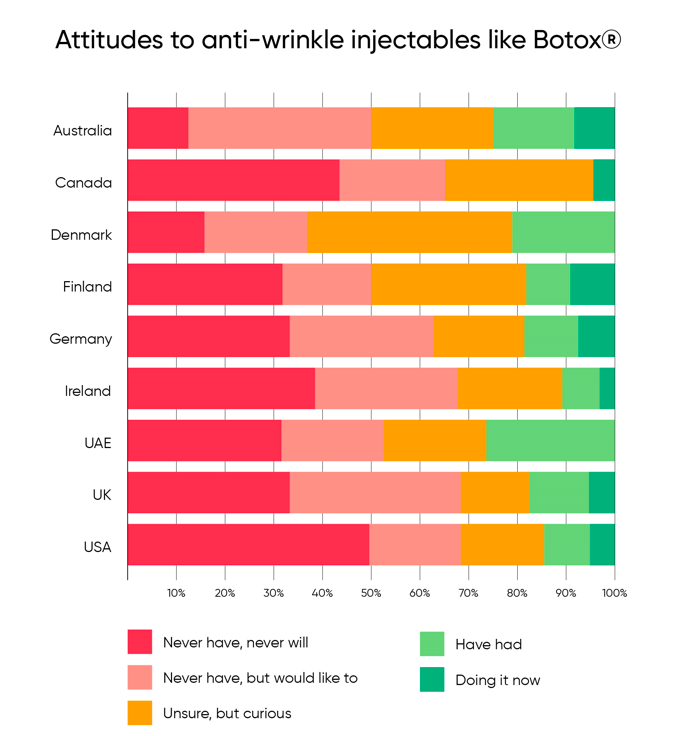 As a once stigmatised treatment (remember the mid-2000s tabloids that would regularly berate celebs suspected of undergoing aesthetic treatments?), it seems that the public perception of Botox® has been overhauled and replaced instead by enthusiasm and general support. Where has this come from?

Two of the main reasons for this change in attitude toward anti-wrinkle injectable treatments can be attributed to the rise in popularity of social media and increased education/availability. As more and more aesthetic clinics show the results of their treatments via real-life images shared across social platforms, more consumers are influenced to purchase the treatment for themselves.

This is especially pertinent as consumers’ peers purchase injectable treatments, again, sharing images that influence their wider circle to invest or at least inquire about the treatment.

The public perception of anti-wrinkle injectables has changed from one associated with “deceitful” celebrities and “botched” aesthetic treatments, to one that is a reputable treatment offering genuine results. This, mixed with increased and widespread education about the safety and local availability of the treatment, has made anti-wrinkle injections all the more popular for all age groups.

What about the individuals that weren’t interested in the treatment? The following percentage of survey participants said that they never have had, and never would have, an anti-wrinkle injectable treatment;

Of those that weren’t interested in the treatment, we asked why. The following reasons were given globally:

What’s interesting about these results is that many participants said they wouldn’t get the treatment due to a lack of time and/or education. Does this mean that individuals could be convinced to purchase injectable treatments from clinics that offer more transparency and education about the treatment?

Even the seemingly “negative” results from our survey make for an interesting insight into an emerging market that is yet to be tapped by the aesthetics industry. Very few consumers gave the “hard no” answer of not being interested. 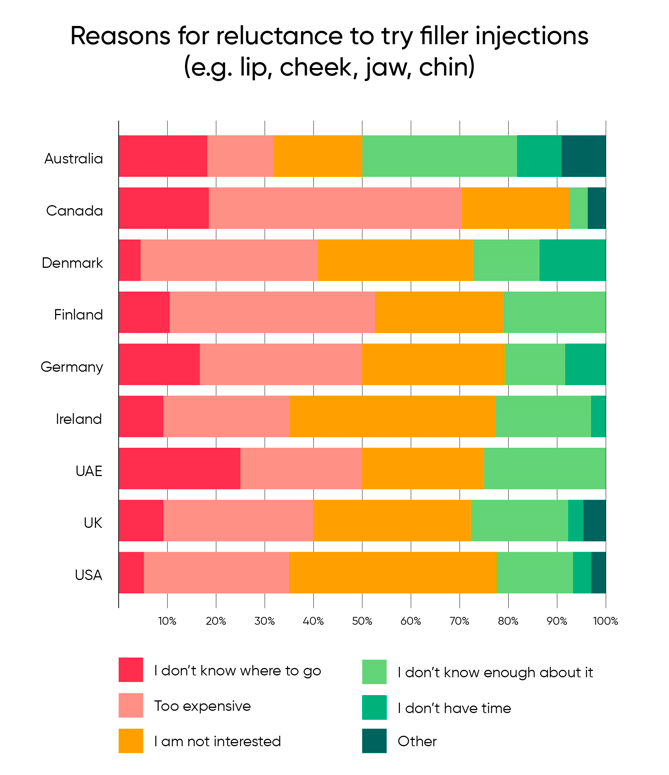 Is the attitude the same toward other injectable treatments, like fillers?

Yes and no. We also surveyed participants about how they feel toward fillers, including lip, chin, and jaw fillers. And below are the results.

The following said they were interested in, or had already undergone, injectable filler treatments such as cheek, lip, jaw, or chin treatments.

In comparison, the following said that they never have had, or never would have injectable filler treatments

A major example of this was the difference in attitude toward filler vs anti-wrinkle injections in the USA, where only 40% of participants would consider filler injections vs 50% who said they would be interested in a treatment like Botox®. What can be done by clinics to increase the interest in both of these treatments, specifically to a US audience? 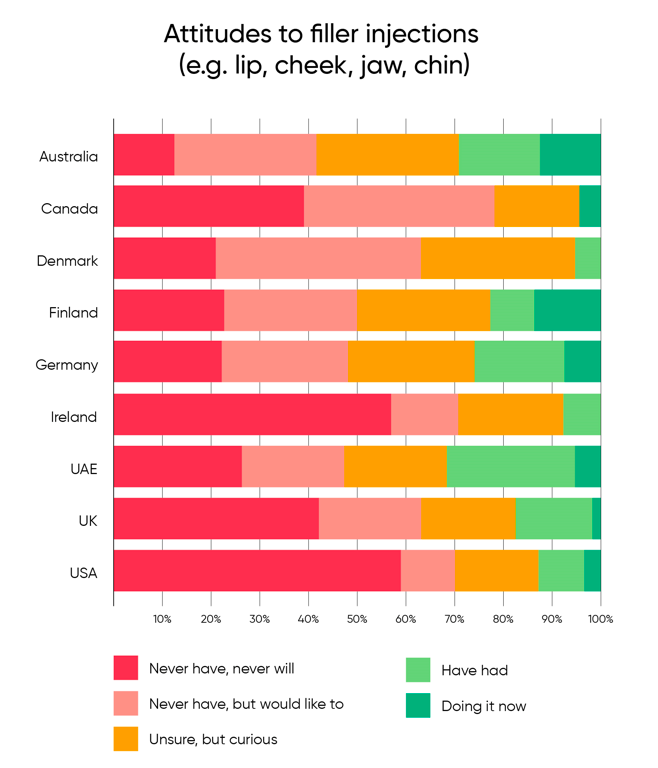 What can salons take from this research?

The main insight that salons can take from this research is that there is a clear interest growing among consumers to purchase more beauty treatments from the medi-aesthetic industry, which is only set to grow in upcoming years.

Speaking to Verna Wall, Phorest’s lead researcher, she commented; “This research reflects a real opportunity for salons who are looking to get into the medi-aesthetic space. The appetite is there among the global public to turn back the hands of time, so this is your sign to invest in that area of your business and give the people what they want. Whether you want to start promoting an already-established aesthetics company or would like to start one new, it’s never been a better time to break into the space and start serving clients.”

Where do we go from here?

As Verna said, it’s never been a better time to break into the medi-aesthetic space and start serving a client base who are informed, interested, and enthusiastic about the treatment. As the beauty industry pivots to one obsessed with genuine treatments that work, medi-aesthetic clinics are being hailed as experts in the field.

Is your clinic going to be part of it?

This research was carried out as part of Phorest’s Salon Industry Report due to be released at the end of 2022.

Avril Kealy is a content writer and SEO specialist in Phorest Salon Software. She is passionate about writing engaging and creative content that keeps the reader at the forefront. A former agency writer, she has dabbled in everything from website writing and blogging to PR announcements, ad copy, SEO optimisation campaigns, and more. She loves the unique creativity and drive of the salon industry and aims to create content that embodies this ethos.
See all articles by Avril Kealy

10 Eco-Friendly Christmas Decoration Ideas for Your Salon this Year

Now that it’s officially December, the Christmas decorations start coming out in full force. And that one staff member who has been eagerly waiting to put on the Christmas playlist […]

Salon Gift Vouchers: a Gift for Them and for You!

The countdown is on. The busiest season of the year for salons and spas is just around the corner. For many people, this means more celebrations to attend and more […]

Salon Christmas Gifts: What Should I Buy the Team?

We get asked “Should I buy my team gifts for Christmas?” every year and our answer never changes; we say yes! When it comes to the festive season, gifting your […]